Much research, most of which scientific, has been undertaken in the past twenty years to explain the unusual, hermetic flesh technique as seen in Leonardo’s late paintings, the Mona Lisa included. Yet, before that of Jacques Franck’s, none has addressed the issue from within methodically, in other words according to painterly criteria. Because the above Leonardo works are paintings and, as such, needed to be studied from an artist’s esthetic-technical point of view : there is no best way than critical copy-work to closely understand the specific processes and stages whereby a given paint film was elaborated. Many hypotheses have been put forth through the years to explain Leonardo’s complex blending, a technique not to be confused with his simple blending, a traditional process in which the paint film was handled both with the brush and the master’s fingers in order to obtain soft focus effects. But no satisfactory, strongly resemblant copy of the Mona Lisa or of the Saint Anne was ever produced based on these speculations. In this respect, Franck’s Leonardo copies have achieved the sole fully convincing visual demonstration of Leonardo’s true painterly method. It is therefore no surprise that evidence of this method was found by Franck finally, many years after his first publications on the subject. An outcome telling us much in that field of research : there is a great difference between the belief that one understands a picture’s making by just looking at it with a connoisseur’s eye, and the actual technical knowledge acquired through years and years of experimental practice thanks to which that making can be understood and explained pertinently. Learning to draw and paint in the classic tradition remains a fabulous means to improve one’s eye judgment on Old Master productions.

When a painter trained in the academic/classical tradition – and being, therefore, an experienced and skilled copyist – visually examines an old master painting, a mental engagement occurs which instantaneously brings to mind sequenced images representing the artistic and technical process followed by the creator, a process that can easily be identified because of a familiarity gained through years of practice. A similar phenomenon occurs when musicians read a score without playing it: they can “hear” the written sounds and melodies while visualizing the technical and musical means necessary to their own performances. However, although they usually deal with old master expertise, neither art historians nor scientists practice the arts of drawing and painting, bar in exceptional cases. For that reason, their visual appraisal of the specifically technical elements presented in a painting are formulated on no sure and practical knowledge of the various artistic and technical gestures whereby they were produced. Such experts, being so remote from the creative process, can only grasp artistic, technical and material realities through their imagination and whatever objective data might have been supplied by scientific imaging and laboratory tests. In other words, such specialists are strangers to what is at the heart of creation, to its intimacies, shall we say, and they cannot but confound their own imagined and partial perceptions with the realities of the creative process itself. That so very few art historians or museum scientists recognise the impossibility of knowing what art is really about without having engaged in making it is exclusive to the visual arts today. Such handicaps could never arise in the world of music because no sensible person thinks serious musical knowledge can be obtained without years of training and the steady practice of a specific instrument. In the visual arts this extraordinary shortcoming creates maximal risks of errors: in matters of art attribution, the vital distinctions between one creative hand and another are too subtle; in matters of conservation, the master’s art and techniques are commonly misunderstood – and nowhere more so than with that of Leonardo da Vinci. In no small measure, the modern-day visual art malaise is product of a system in which the artist – the party holding a unique expertise and insight – is granted no institutional recognition when precisely such knowledge, purely factual and not theoretical, is irreplaceable in art expertise.

That is why, as early as 1998 in my essay on artistic training published in Coré, a conservation review edited by the French section of the IIC, I recommended that students in art history should be trained in art and acquainted with the elementary notions of both traditional drawing and painting in order that their approach to the discipline lies on pragmatic specialized grounds rather than on vague, unverified concepts in matters of art making, as are exemplified below [1].

There of course exist a number of art specialists whose visual acuity and methodology of research are excellent, but they are getting fewer and fewer (for reasons not examined here). Sadly, tangible evidence exists also of the ignorance of some leading experts regarding the elementary grounds of traditional painting techniques inherited from the Renaissance, to which Leonardo’s art practice belongs. On that particular issue, for instance, in a 2019 documentary movie broadcast world-wide, an otherwise well-meaning Louvre Museum curator interviewed about Leonardo’s sfumato technique provided a staggering explanation that revealed an ignorance of the fact that, in the oil process, when it is laid on the support (canvas or wood typically), the paint material itself (pigments + binder) should first be diluted to a suitable degree with a fluxing agent – i.e. a solvent (turpentine in the case in point) [2]. The presented extravagant hypothesis in question was addressing the ravishing, subtle, flesh sections in Leonardo’s Louvre St. Anne and the Mona Lisa, on a conviction that pigments and oil alone were used. In terms of practice, it amounts to an insolvable technical problem inasmuch as the rheology of the presumed material to be handled for achieving impalpable effects like those seen in the Louvre Leonardos is a major impediment: such a sticky and oily paint is, structurally, far too unruly to be appropriate for that kind of ultra-delicate work. Thanks to my own researches – now confirmed by Philippe Walter and Laurence de Viguerie (see Further Thoughts II) – it is an established fact that Leonardo used to superimpose in the flesh sections of the above-mentioned works numerous microlayers of very liquid paint according to material principles close to the watercolour technique, except for the fact that, in this particular case, the fluxing agent was turpentine and not water. In truth, our museum curator should have known better: it is an obvious fact, noticeable by any ordinary museum visitor, that, during the Renaissance until the late 19th century, the most part of paintings was executed using diluted paint as testified by the flat, even sections still observable in them to date. The zones of the compositions, however limited in terms of surface, in which pure oil was added to the paint are the glazed ones, and the sections where non diluted, thick pasty paint, is encountered are those ones executed in impasto, a technical process which was notably employed for the treatment of highlights and for the demonstration of the spontaneity and virtuosic quality of the artist’s brush. To be more precise, it should be added that no stricto sensu glazes (transparent layers) were used then for modelling in the flesh sections, but, instead, thin veils of translucent paint [3]. Misinterpretations regarding art practice such as reported here are commonplace in the field of connoisseurship and, in themselves, have no a priori serious importance. Yet, in the case of Leonardo’s late works it has one indeed because, in the event of cleaning, their very low oil-content paint film is at far greater risk under solvent action. [4]. It certainly is not advisable, therefore, that misleading information should be in circulation in the international museum sphere about the technique used for the making of such universal masterpieces. Erroneous preconceived views should never sanction or influence restorations. 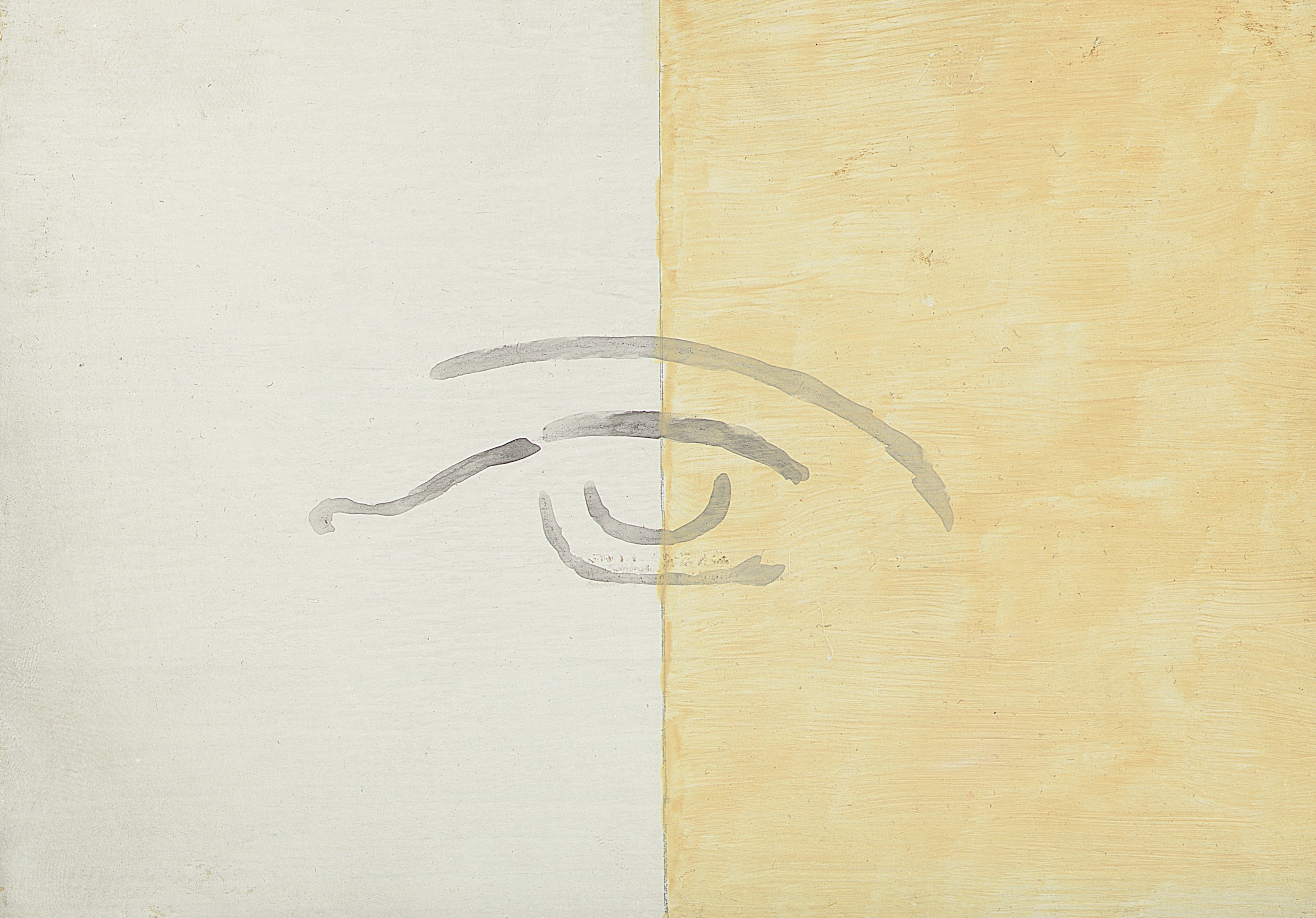 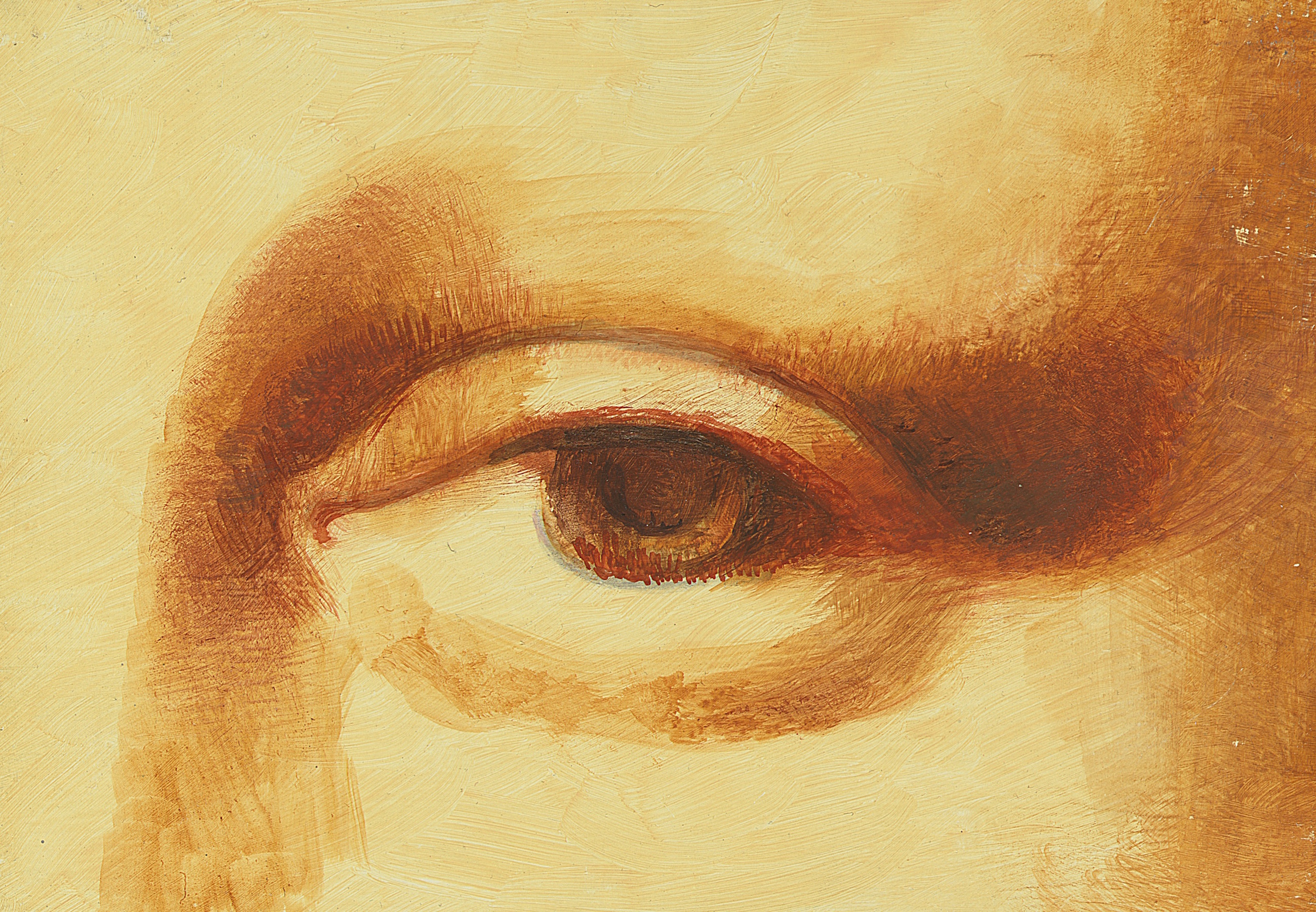 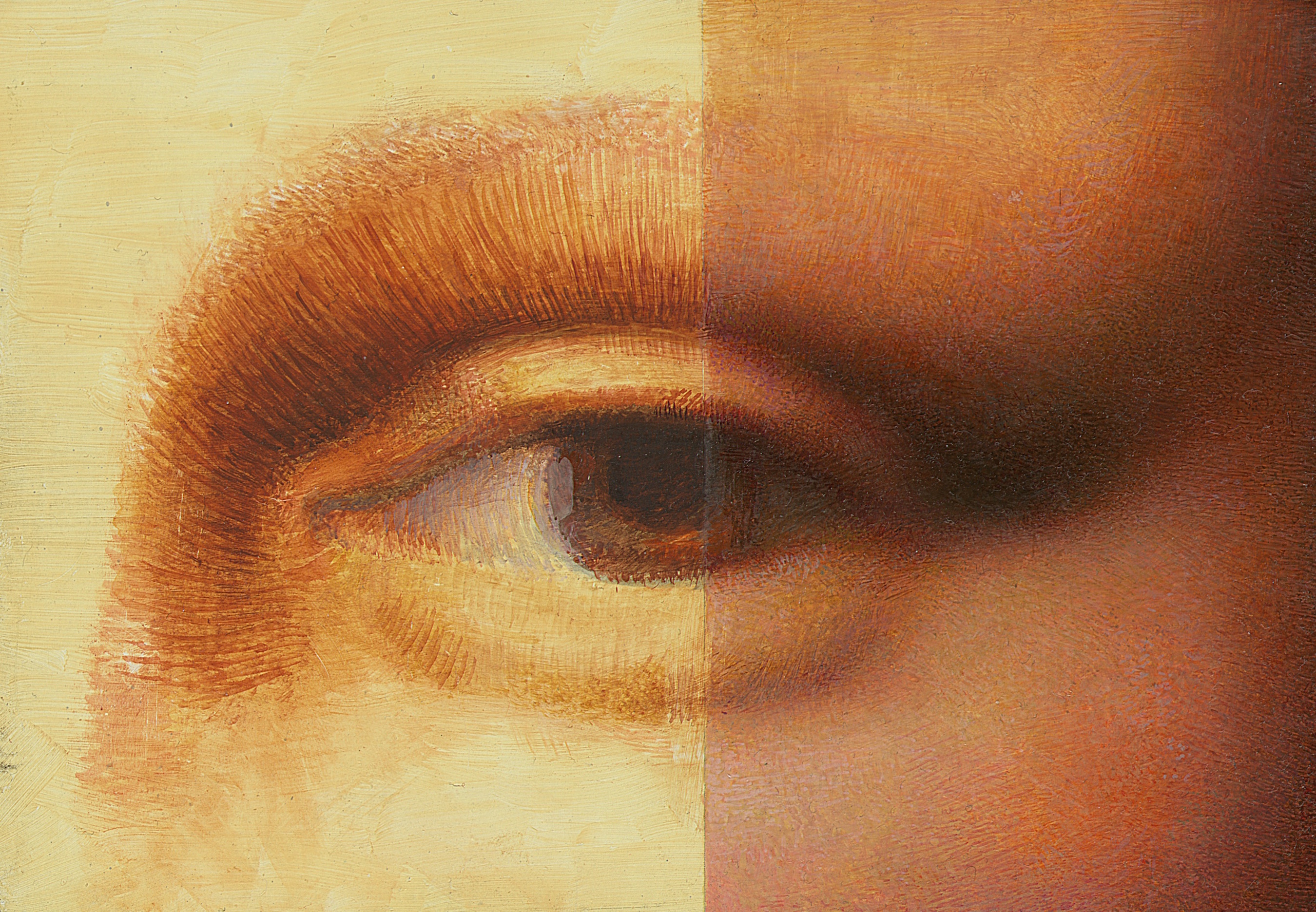 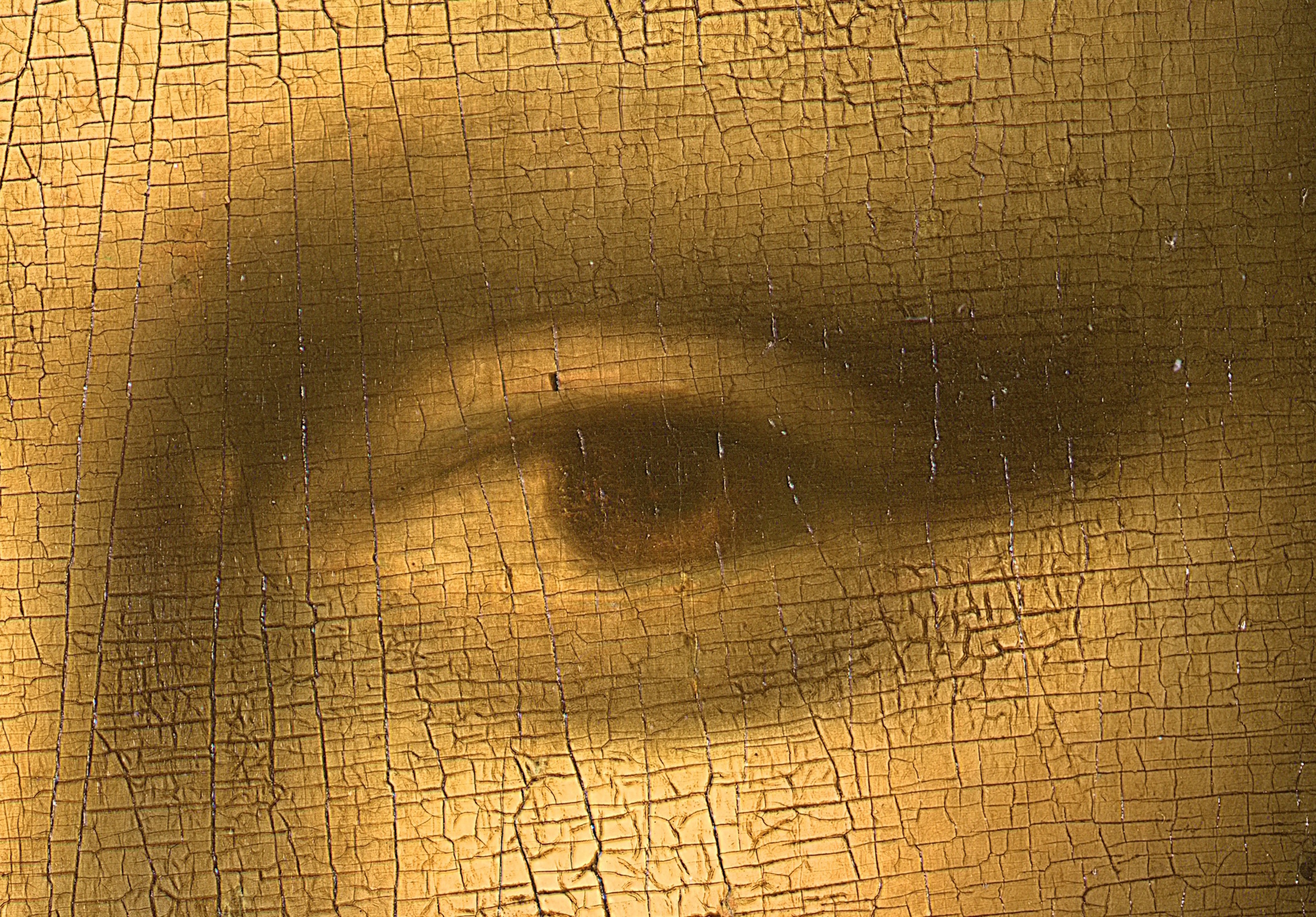 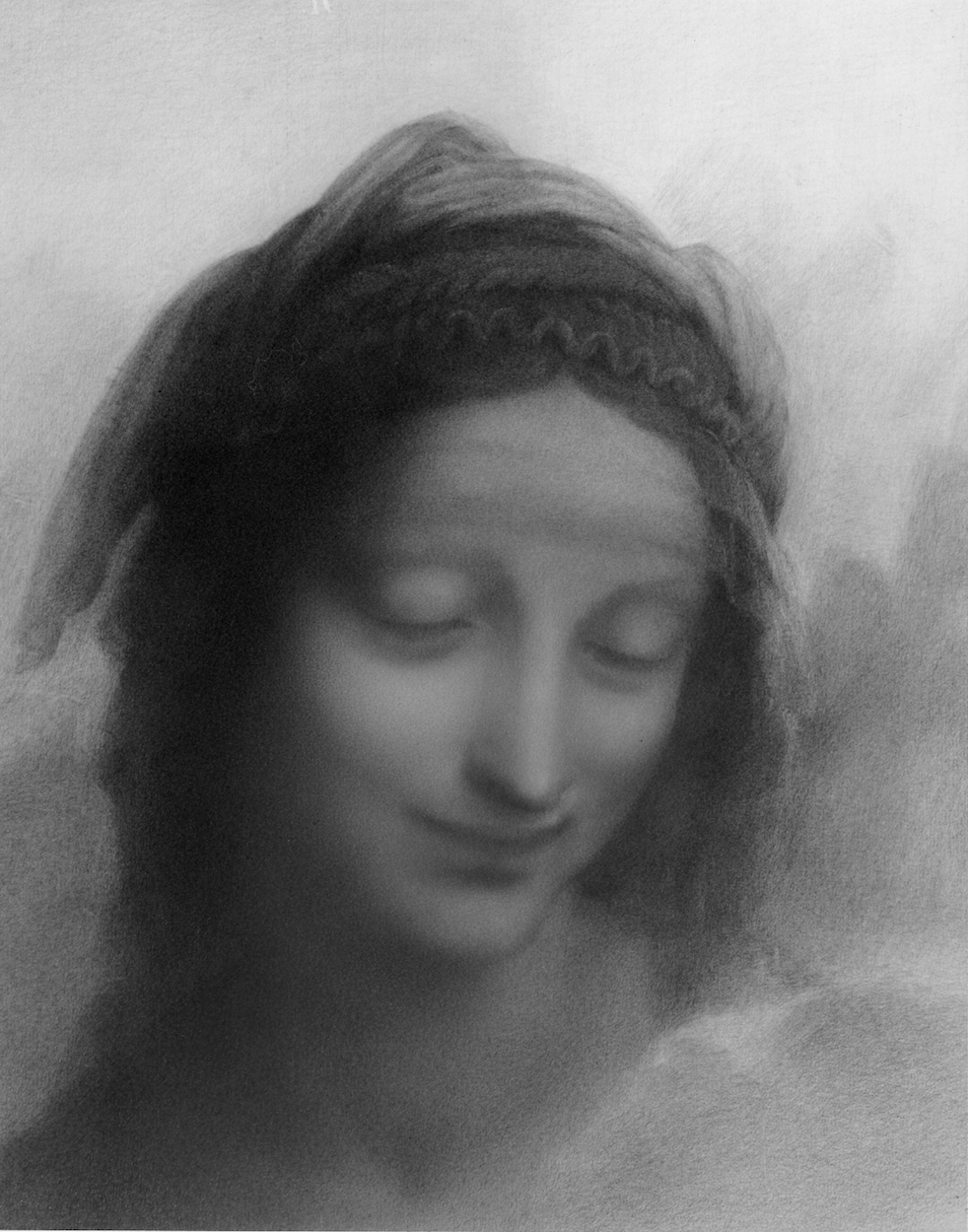 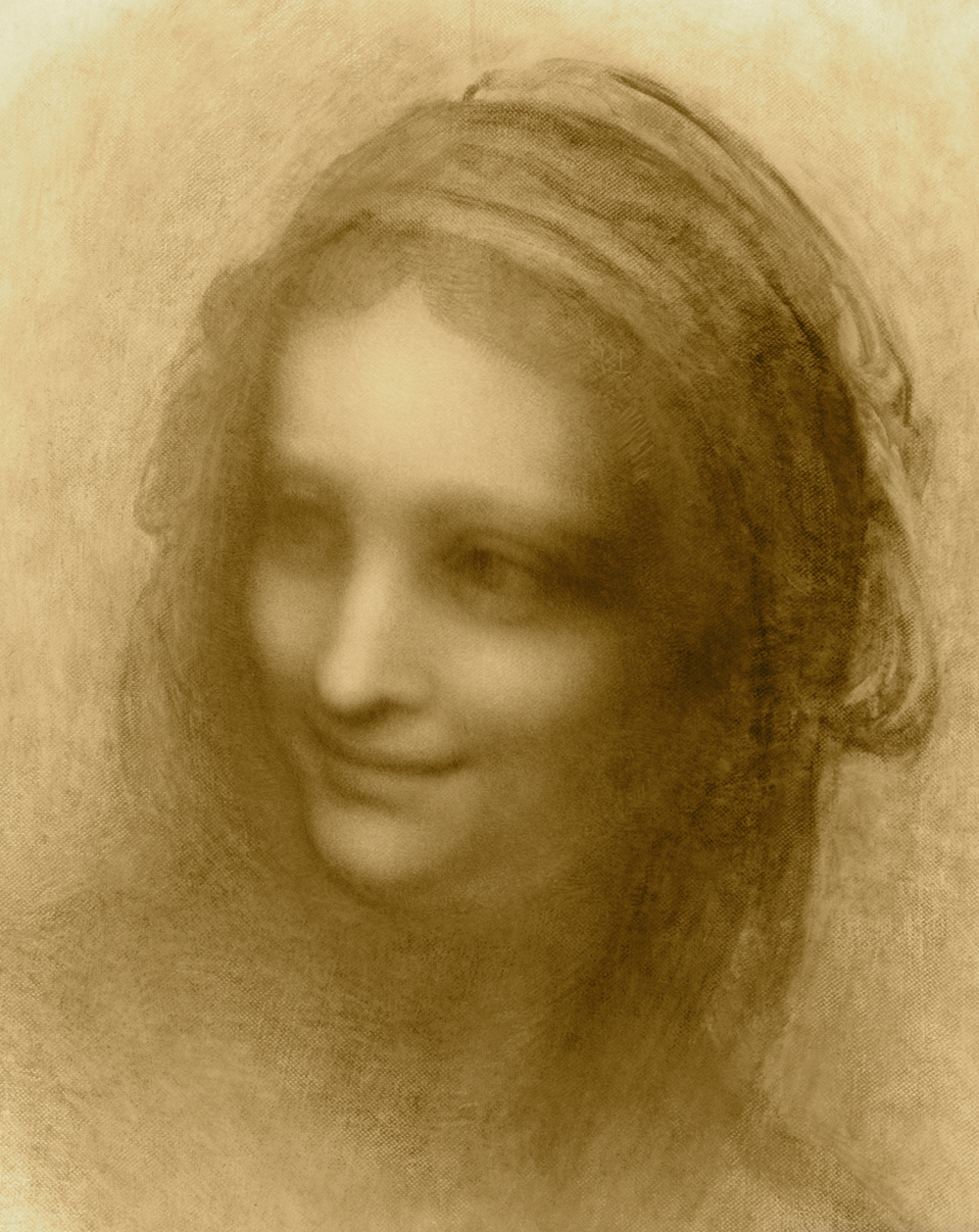 The first, drawn in colour pencils after St Anne’s head in the Louvre panel painting was made as a graphic-painterly demonstration to student-restorers learning how to do particularly skilled inpainting on the Old masters. Copying with colour pencils was an early stage of their training. Given that the ultra thin upper layers of Leonardo’s complex blending were partly executed by means of microdivisionism, obtaining micro-strokes either with the highly-sharpened end of a colour pencil or with the highly sharp end of a very fine brush responds to one and a same technical principle. Had Leonardo used colour pencils to draw St Anne’s head, it might be said that the end result would have been rather like mine but with added genious.

The second copy was freely made in oils after the unfinished head of St Anne in the Burlington House Cartoon (The National Gallery, London). That particular exercise served as a base for my subsequent demonstration since the binder used in Leonardo’s paintings was siccative oil.

In 1995 it appeared that the X-radiograph of copy n° 2 generally resembled the X-radiographs of the Louvre Leonardos of his late period, which have a typical evanescent aspect with low contrast and density. Actually, the Mona Lisa, the St Anne and St John-the-Baptist are works that were painted using complex blending. In order to make this technique clear, see below the diagram of a theoretical cross-section of a paint layer built up by means of complex blending. In addition, the small panels above show the making of the Mona Lisa‘s own left eye step by step when using complex blending.

The panel demonstrations are informed by data observed on original Leonardos concerning the preparation and the ground layers to which is combined the rediscovered technique of complex blending. These elements were published in 2006 on the occasion of the La Mente di Leonardo exhibition held at the Uffizi Gallery in Florence.

« Dear Mr. Franck, […] Thank you very much for your publications and dossiers : they are most interesting. Your research on Leonardo’s works and technique is fascinating, and your copies after his works are stunning. » (Federico Zeri, Art Historian, Visiting Professor at Harvard University and Columbia University, 28th April, 1994) ; « Dear Mr. Franck, […] I am fascinated by your research on Leonardo’s way of painting. I hope that your discoveries will prevent Museums and Restorers from touching Leonardo’s works. » (Federico Zeri, 4th July, 1997).

« Dear Jacques, […] First, let me compliment you for the competence you showed me in understanding (probably for the first time ever) Leonardo’s technique and specifically the « sfumato ». I was very impressed by your exceptional skill in reproducing the sfumato and also by the quality of the art works you showed me. I have never seen anything so accurate in reproducing the smooth transition from light to dark as you have succeeded in doing. I believe your book would most probably be the very first contribution to understand Leonardo’s technique as a painter. » (Dr. Engineer Maurizio Seracini, Director of the scientific laboratory Editech, Florence, Italy). 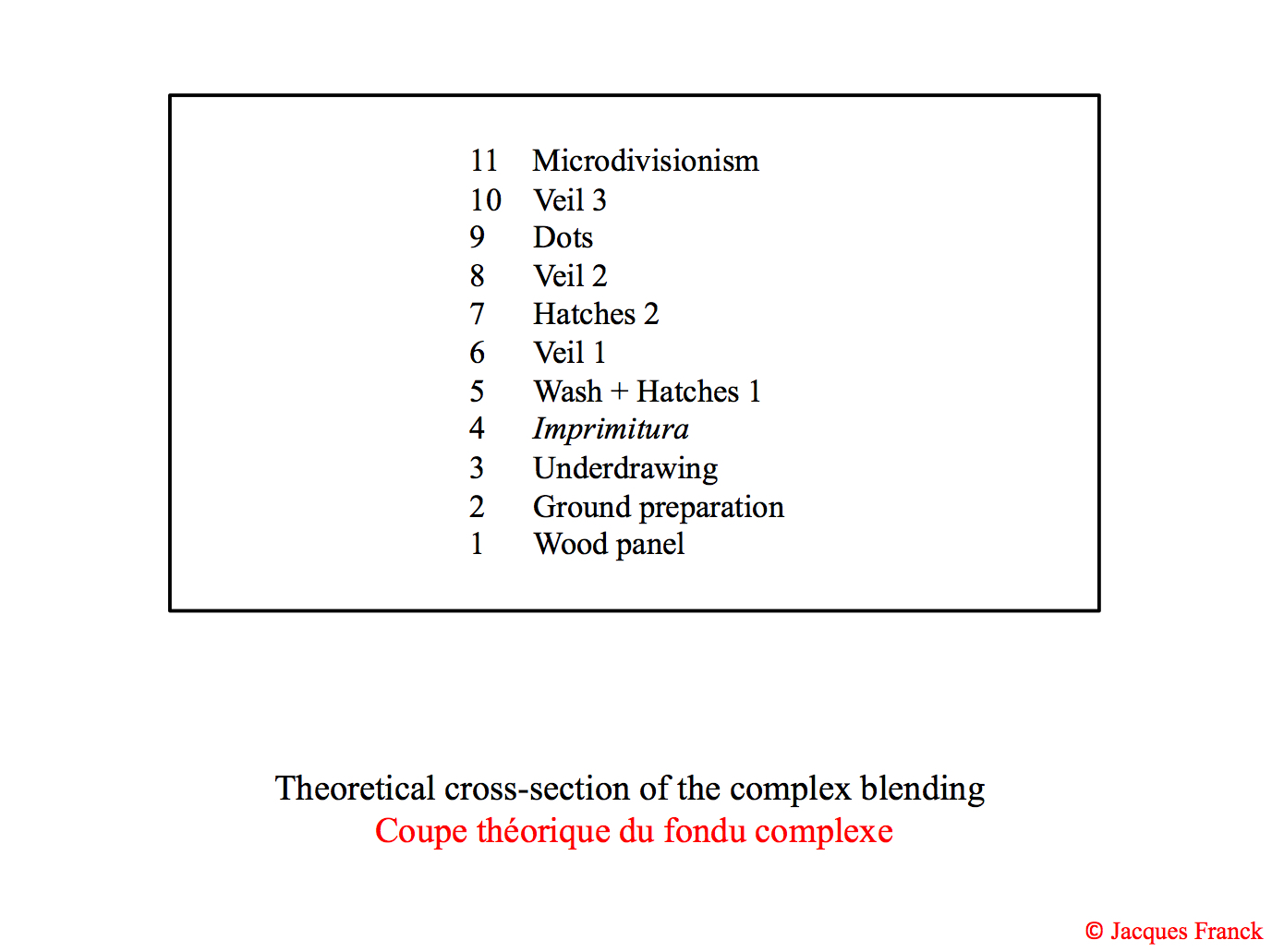